Michael Santoro got "Midieval" on your plates. 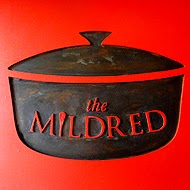 This fall, The Mildred's chef and owner,  Michael Santoro created an extraordinary foodie group experience with his..."Contemporary take on a Midieval Comfort Food Dinner!  This is a fun throw-back to the 1400's.  The 4 course meal had wonderful vegetarian options too!

Arriving a bit early for cocktails at the bar, some of us had a great start to the evening.  I particularly fell in lust with the "Mr. Mister".  It consisted of Bourbon, Cognac, Basil, Mint Bitters and lemon.

Once comfortably seated, our group had the whole restaurant to ourselves this Sunday evening.  It's a good thing because everyone seemed to be having a "socially" acoustic time.  Im sure happy hour helped with this but we were all more than ready to start the 18th foodie meal and the first one in almost a year!  There were some new faces as well as some of the earliest members of the group.  Honestly, even though food occupies almost all of my waking (and sleeping) thoughts, it's the people interacting that I love the most about these events. (audience makes "awweeee" sound)

Shortly after settling in with some delicious house-made bread our food adventure began.  The first course of Braised Cockscomb with barley risotto and celery root was the very dish that the evening hinged on.  I suspect it's why most of us were there and why so many were not. Yes, cockscomb is what you might think it is - if you watched looney toons and were a fan of Foghorn Leghorn....


The dish was WONDERFUL in my opinion.  Everyone had a generous portion of cockscomb in their dishes and tentatively dipped in.  The texture was slightly gelatinous but more like a mushroom to me.  The risotto was perfect with layers of subtle and vibrant flavors that made you appreciate Chef Michael's skills.

After a delicious start which appeared hard to follow, the large pans of fish pies arrived! This was wonderfully crafted with vibrant flavors and a perfectly crusty, flakey light heavenly crust.  The entire experience of this course had my eyes rolling over in an epicurean fit (is that a thing?).  Seriously, this course was perhaps my favorite (and I'm a huge lamb fan). SO GOOD.

I was sitting next to one of the few vegetarian diners and had the luxury of tasting each of those courses as well.  Initially I wondered if there was much sense for such options on a night like this, but I am sure glad I had the chance to taste even more of the chef's range and delicious work.


As the group continued enjoying their tastebuds off the 21 attending sounded more like 40.  This is always a good sign of content and happy eaters ... that aren't too shy either.  Perhaps some were relieved to have survived the cockscomb, some might've been content from the fish pie (which was one of my favorite parts) and some maybe were still enjoying the effects of the delicious baby lamb high.

To drive this great meal home, Chef Michael and Ashely (the house manager) brought out a perfect ending with home baked classic apple pies for dessert.  Dishes first appeared with a scoop of their cinnamon ice cream.  Then after generous portions served out, the remains left to our tables to fight over for more!  It was really really great.  Im running out of vocabulary so trust me.  I don't like cinnamon flavored things but that ice cream on that pie was a match made in heaven.


After dinner I overheard someone say it was an interesting choice to have two pie courses when discussing how much the meal pleased them.  I mentioned it in a conversation with my mom and she said "I can't blame him, there's nothing wrong with that.  The boy knows how to do crust!".

It seemed to me everyone was very pleased that they attended and had a great time and perhaps became new fans of The Mildred.  Michael Santoro's skills in the kitchen are not to be surprised about.  He's has a great resume of past experiences.  I'm excited to all the potential future ones with him in Philadelphia.